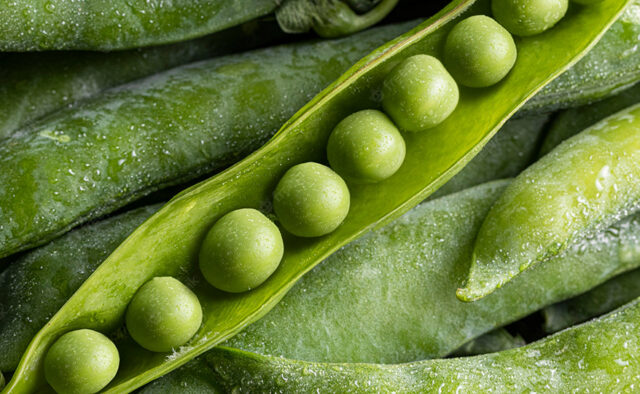 Are Peas Fruits Or Vegetables?

Most people assume that peas are vegetables, but they are actually classified as fruits. This is because they contain seeds that will grow into new plants. Peas are part of the legume family, which also includes beans and lentils. They are a good source of protein, fiber, and vitamins, and can be eaten fresh, frozen, or canned.

Peas are the little green seed pods or spheres that may be found within pea pods on the pea plant (Pisum sativum). Although the pod is often prepared and consumed as a vegetable, botanically speaking, it is a fruit since it develops from a flower and contains seeds. In some types, such as snow and snap peas, the pods are consumed in their whole, along with the seeds that are contained inside them. When working with garden peas, commonly known as sweet peas, the seeds are extracted from the pod, and the pod itself is thrown away.

Peas are one of the foods that are grown all over the globe in the greatest quantity. Peas are said to have originated in the wild in the Mediterranean basin prior to the Neolithic (or Agricultural) Revolution, which occurred approximately 10,000 B.C. At that time, peas were often allowed to mature on the vine until they were tough enough to be harvested as field peas (similar to the peas used in dishes like split pea soup). Fresh garden peas rose to prominence as a culinary favorite in England throughout the 17th century. When compared to field peas, they were regarded to be of a higher class due to their younger age, increased tenderness, and overall superiority.

Green peas took some time to catch on in the United States, but once they did, Thomas Jefferson was known for cultivating 30 different varieties of them in his garden. It is so convenient to consume fresh and young peas thanks to the development of canning and freezing that most people don’t even aware they aren’t eating an adult plant when they do so. Although dried field peas are still available to be used for rehydrating in soups and other dishes, most diners choose for the vivid green garden kind of peas.

Peas may be purchased in a variety of forms, including fresh, frozen, tinned, and dried. These days, you may find peas in cuisines from all over the globe. Peas are used in a wide variety of cuisines across the globe, ranging from Indian curries and Swedish soups to Chinese stir-fries and Hungarian dumplings. In general, they are not costly and are simple to put together.

Peas have a satisfyingly sweet flavor that is encased in a bite-sized ball with a crunchy texture. This delicacy will be present to varied degrees in each variety, with fresh sweet peas having the most candy-like quality. Peas that need shelling tend to be drier and have a better flavor when cooked. Peas of all kinds, including snap, snow, and sugar snap, have a somewhat bitter aftertaste and may be enjoyed either fresh or warmed very slightly. Consuming either fresh or frozen peas is going to provide you with the most accurate representation of the pea’s flavor. The taste of dried field peas is richer, and they are warmer and less green in appearance. Because of this, the ideal way to enjoy this particular kind of pea is either in a soup or a stew.

How To Cook With Peas?

Peas are quite adaptable and may be used in a wide variety of settings. When using fresh peas, it is important to clean them well before to cooking. When using garden peas, also known as shelling peas, the pods must be removed and discarded. Snow peas are often left whole and sautéed in many Asian recipes. They are also frequently left raw and put into salads and pasta dishes. As a raw and fresh snack, whole snap peas are delicious on their own. Peas that have been dried out need to be rehydrated by soaking before they can be cooked.

The green orbs only need to be heated until they are warm, or the peas may be added to casseroles, soups, and other meals to complete the cooking process. Peas that have been cooked and then mashed may be pureed into soups or used as baby food. Whole peas are delicious on their own, but they may also be enhanced with butter, Parmesan cheese, and a pinch of black pepper.

Because they cook so rapidly when placed in an oven at a low temperature, frozen peas seldom need to be thawed before being prepared for the oven. In addition, children like them during the warm summer months since they provide a wholesome method to cool down and are comparable to little ice pops made by nature.

Are Peas Good For You?

Indeed, these round, small marbles are as good for you as they seem! They are an excellent complement to any meal since they are low in calories and abundant in a variety of nutrients. You may serve them as a side dish, incorporate them into a curry, or prepare them in the traditional British fashion as “mushy peas.” They are versatile and complement various types of protein, including fish, meat, and vegetarian sources of protein such as tofu and lentils.

Peas and other types of pulses have a good amount of fiber, which is critical to maintaining good digestive health. They also include a sizeable quantity of coumestrol, an organic molecule that has been shown to reduce the risk of stomach cancer and add to the protection offered. The estrogen levels in your body may be regulated with coumestrol, which helps prevent heart disease and osteoporosis while also reducing the severity of the symptoms associated with menopause.

Peas, similar to carrots and broccoli, are rich in carotenoids, which are pigments that are responsible for the vibrant hues of various plants. Peas include carotenoids known as lutein and zeaxanthin, both of which are excellent for the health of your eyes. By serving as a filter against potentially damaging blue light, they assist to prevent your eyes from developing long-term conditions such as cataracts and macular degeneration.

Peas are great for your immune system not just because they are loaded with vitamins but also because they contain additional antioxidants. They include vitamins A, B, C, and E as well as zinc and catechin, which is one of the reasons why green tea is so well known for its health advantages and other antioxidants. Other antioxidants are also present. Because of their anti-inflammatory effects, they reduce a person’s likelihood of developing illnesses such as diabetes, cardiovascular disease, and arthritis.

Because the nutritional value of peas is relatively same regardless of whether they are fresh, frozen, or canned, they are an excellent choice for maintaining a balanced diet in your home kitchen throughout the year.

So, are peas fruits or vegetables? Well, they are both! Peas are classified as fruits because they contain seeds and develop from the ovary of a plant. However, peas are also considered to be vegetables because they are typically eaten as part of savory dishes. So there you have it — peas can be both fruits and vegetables depending on how you want to use them. Now that you know this fun fact, why not experiment with adding them to both sweet and savory dishes? You might just be surprised at how versatile they can be.